Festival Republic have recently announced that one of the premiere live electronic acts in the world RÜFÜS DU SOL will play Gunnersbury Park in their biggest ever UK show. The Grammy-nominated trio have been busy packing out stadiums in the US following the release of their fourth studio album ‘Surrender’ and will be joined by a host of trailblazing special guests Jon Hopkins, Bakar, Georgia, Flight Facilities and JOPLYN.

Australian three-piece RÜFÜS DU SOL have steadily become one of the world’s most popular live electronic acts. Their new album ‘Surrender’ not only marks a huge milestone for Tyrone, Jon and James as a record that can effortlessly thrive on a dark and brooding dance floor – but also flourishes impressively in the stadium-sized shows it’s taken them to. Riding high following a sold out three-night run at Banc of California Stadium, previous shows at Melbourne Sidney Myer Bowl and with legendary sets at Coachella, Bonnaroo, Lollapalooza under their belts – this huge summer London show promises to be something special.

Previous GRAMMY, Ivor Novello and two-time Mercury Prize nominated artist Jon Hopkins is one of the most celebrated electronic musicians of his generation. A studio and live auteur with a unique grasp of dynamics, he recently wowed with the release of his new album ’Music For Psychedelic Therapy’. He has forged a reputation for live performances that are visceral, generous and charged with a rapt, sensuous beauty. 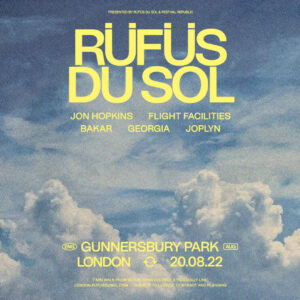 Australian Electronic duo Flight Facilities are on a roll following the release of their long-awaited sophomore album ‘Forever’ – their first in seven years – after taking their infectious debut record ‘Down To Earth’ to huge audiences around the world. Between festival anthems and mellowed electro-pop, the duo have firmly cemented their return in the studio and on stage.

North-London artist Bakar, has become one of the most distinctive and vital new voices in UK. Fresh off the release of highly anticipated album ‘Nobody’s Home’ ft. collaborations with heavyweights Maverick Sabre and Celeste. Bakar is a multi-faceted artist, doing things on his own terms who is on the cusp of stardom. Georgia has been on a dazzling journey since the release of her critically acclaimed debut album in 2015. Her second album ‘Seeking Thrills’ blossomed into life, animated by Chicago House piano line and vintage drum machines. It captured the intoxicating freedom of the dancefloor and saw her exceeding all one-to-watch expectations.

JOPLYN is a Berlin-based producer, DJ and singer-songwriter who was recently hand-picked as one of BBC Radio 1’s Future Stars of 2022 by Pete Tong. Her music can be described as a mysterious, futuristic and emotive “Berlin Sound”.  Her recent singles have been remixed by heavyweights like Booka Shade & HOSH. JOPLYN has released on labels such as Watergate Records, Blaufield and already shared the stage with Jan Blomqvist, Andhim and Booka Shade.