Glastonbury, the largest greenfield festival in the world returns next month even bigger than ever with another outstanding line up to excite all electronic music lovers.

The Glade Area promises a diverse, cutting edge and classic roster including legends, Carl Cox (who is set to deliver a classic Funk, Soul, Disco and House set) Fat Boy Slim and Faithless. Over on the Spaceport stage, British DJ and producer Patrick Topping heads the bill alongside Leftfield for a rare DJ set. 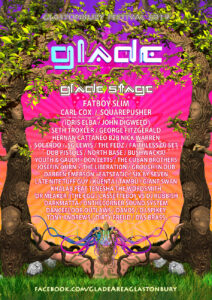 As if the above lineup isn’t enough to get you searching for a last minute ticket (!), Glastonbury‘s designated clubbing hub, Block9, is set to debut IICON, the “largest and most ambitious project” it has ever worked on. Home to legendary venues including NYC Downlow and London Underground, Block9 will triple in size this year becoming a spectacular 15,000 person outdoor arena. Mary Anne Hobbs from BBC 6Music spoke to the festival Co-founders Gideon Berger and Stephen Gallagher, revealing “We’ve taken over another field so Block9 is expanding and we have a very, very exciting new project that we’ve been working on for the last four years and it’s going to happen in June this year.”.

If you are one of the lucky ticket holders for this years Glastonbury, be sure to catch Carl Cox on The Glade Stage and head to the Block9 area early doors. Even though the lineup is still to be announced, something tells us IICON at Block9 is going to be off the scale!

For more information on Glastonbury 2019 visit: