It’s all gone ULTRA_WEIRD! Miami has recently delivered a saddening blow to music aficionado’s globally passing off an abstract performance as a justified festival feature. If you haven’t already witnessed the wave off threads popping online, we suggest you read further to understand how the industry we know is clearly under attack from enterprising mega machines that don’t understand the difference between an international DJ or a Happy Meal.

As any music fanatic will attest, the industry never delivers a dull day as it continues to live up the entertainment tagline it was profoundly awarded many years ago! The latest controversy to hit the scene was Ultra Music’s latest event showcasing none other than KFC’s iconic Colonel (see video below).

Some might say this paid for promotion and commercial commodity has no room in today’s rave scene, heralding either the death kiss or a marked change to how promoters are held responsible for nurturing breakthrough talent, supporting its original founders and roots, whilst finding a future for the legions of global clubbers in preference to standing on their well-worn trainers to make a quick dollar. It’s time to vote with devotion to the dance floor and agree that brands unrelated to a positive progression is no more!

A preview of the chicken and cheese-fest below:

It was only days ago, that Kentucky Fried Chicken (KFC) announced via Twitter that DJ Colonel Sanders would take the Main Stage at none other than Ultra Miami. The brand ambassadors shared a quote on behalf of the KFC identity and icon “One thing a lot of people don’t know about me is that I have been a huge fan of electronic music for the last few days, and I can’t wait to show off the DJ skills I’ve developed in that time. SEE ME LIVE AT ULTRA on 3/29!”

This immediately generated feedback from even the festival’s own performers and headliners, spearheaded by Marshmello stating, “From the beginning, this entire stunt has been pretty cheesy.” Further calling KFC’s set “lame.” The main argument that has been voiced regarding DJ Colonel Sanders is the fact there are hoards of up-and-coming artists that rightfully deserve the spot as a career highlight and showcase of true talent. Many DJ’s have referenced this as “The Ultra Fast Food Festival” “Fyre Festival Part 2” and a “Rip on Rave Culture of Disneyland proportion.

Taking the words directly to the heart of one of the founding fathers of the Techno scene, Kevin Saunderson took to social media to share his own personal views in a well constructed and neutral approach searching for answers. This ignited a widespread industry response, clarifying that people know their history, care deeply about the club scene and are also mutually disillusioned with the direction many modern promoters are taking.

A mix of global DJ’s, Producers, Press Agents and die-hard fans all jumped online to express their disfavour at the public display and festival production that took place at Ultra Miami. Digging deep into the core of the credible music industry we witnessed an onslaught of well-curated comments from Techno innovators and originators like Kevin Saunderson the Inner City and KMS maestro, Carl Craig and the list goes on. 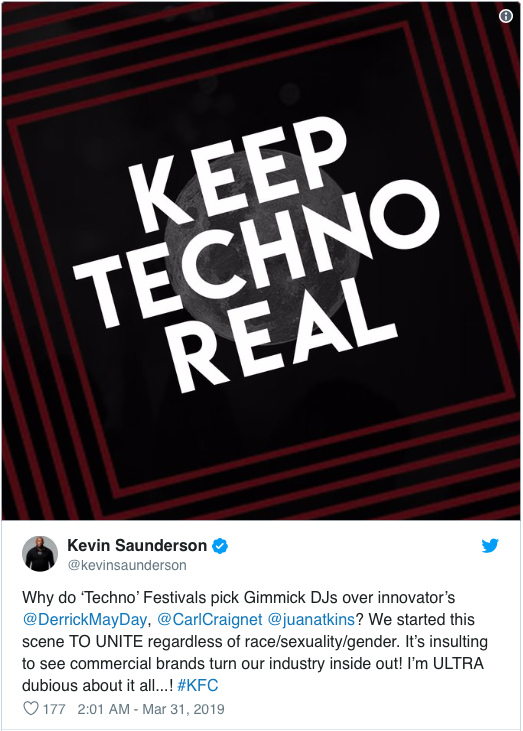 A few sentiments below:

There seems to be NO limit on the lack of commonsense or ethics,business is business but this is really to much! At the expense of creative people corporate + over zealous mindless promoters are destroying dance music!

It’s fucking sacrilege to have a Techno music festival without either Derrick May, Kevin Saunderson or Juan Atkins.

This @kfc colonel sanders Djing at @ultra is lame. I can think of a lot of other artists that actually deserve to be on that stage instead.

Crazy how there are thousands of young talented electronic musicians who would kill for an opening slot at Ultra music festival but instead they book a giant fast food corporation to run a glorified PR stunt that rips on rave culture.