Time to unite and move together as we generate global attention with the industry coming together to SAVE OUR SCENE UK PRESENTS #FREEDOMTODANCE. The scheduled #FREEDOMTODANCE is a march that’s organised by Save Our Scene UK and will take place at 12pm on Sunday 27th June.

The move is backed by some of the biggest names in the industry; Eats Everything, Alan Fitzpatrick, Hannah Wants, Franky Wah, Fat Tony and many more are all set to perform as well as strong support from Michael Kill CEO of the Night Time Industries Association who’s firmly behind the demonstration. The events and music industry has been hugely affected over the past 18 months and most confidence has been lost in the Government’s handling of the arts with huge signs that they have a complete disregard for industry itself.
The march itself is expected to be a benchmark occasion with DJs from all corners of the scene coming together in unification under a rallying cry of #FREEDOMTODANCE. 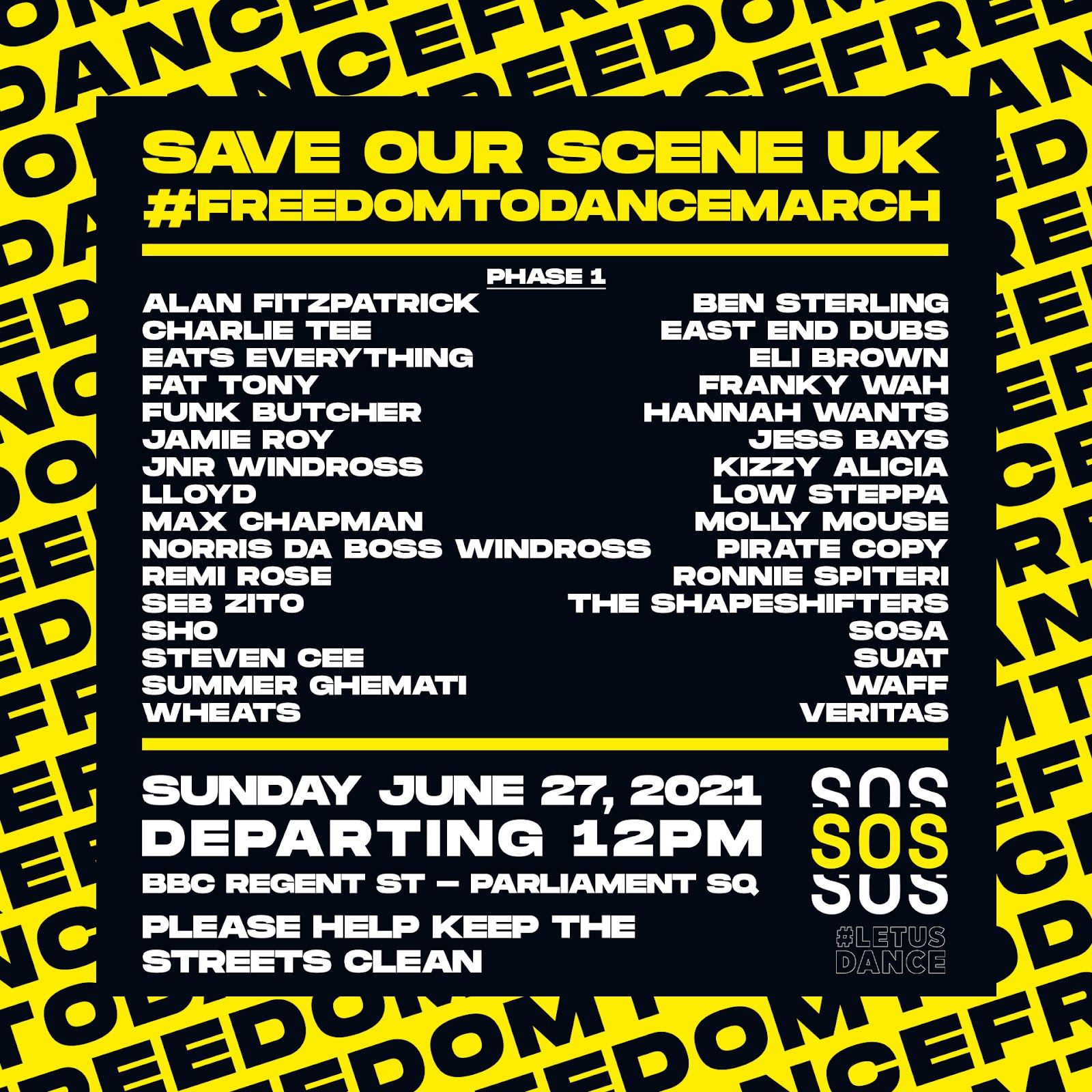 On Sunday 27th June 2021, Save Our Scene UK (“SOS”), #LetUsDance and friends will be demonstrating in London with performances from some of the biggest names in music. It is expected to be the largest demonstration the music industry has ever seen.
Kai Cant, the founder of Abode came to SOS with the initial idea and has since rallied DJs and powerhouses from across all corners of the scene to come together under the rallying cry of #FreedomToDance!
The march will depart from Marble Arch at 12pm on Sunday making its way to Parliament, with DJ sets from the likes of Alan Fitzpatrick, Eats Everything, East End Dubs, Fat Tony, Franky Wah, Hannah Wants, Jess Bays, Max Chapman, Charlie Tee, Kizzy Alicia, SUAT, Seb Zito, SOSA, Waff, Summer Ghemati, Wheats and many more… 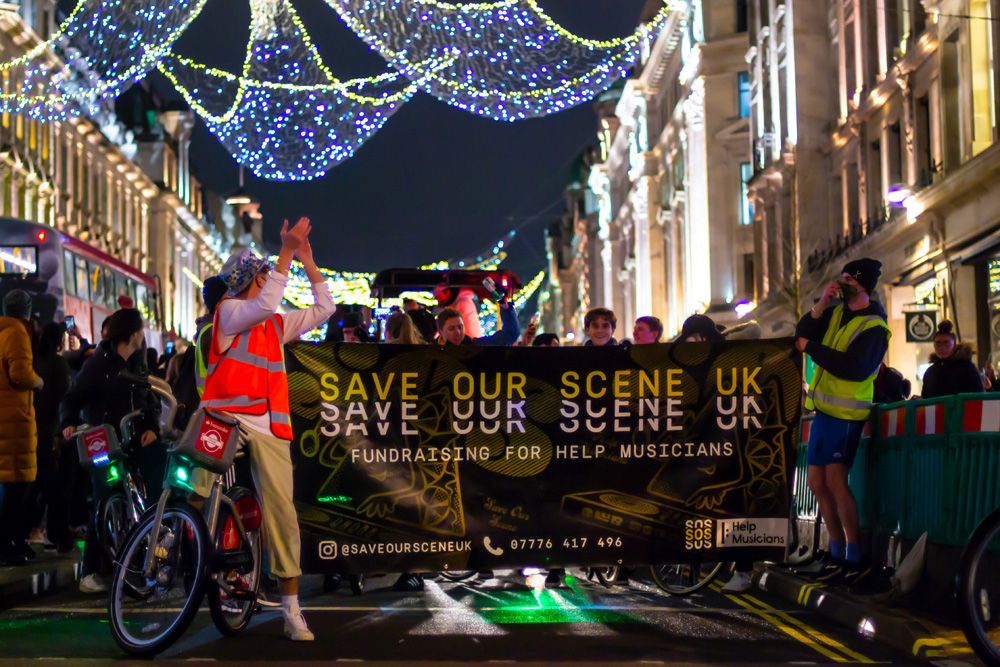 The Founder of SOS, George Fleming says, “Whilst it’s great to see waves of football fans partying in London, it really asks us a question, why is the music industry still being suffocated by the Government? We have proven that we can open responsibly, and 58,000 people took part in the pilot events, of which only 15 people tested positive (5 of which were home related). This has proven the industry can successfully carry out safe events without adding to the spread of the virus.”
Michael Kill CEO NTIA / Savenightlife CIC #LetUsDance says “The Government has consistently marginalised our sector, we have had to fight for every bit of support and engagement throughout the pandemic. We have been continually targeted by the Government and excluded within every announcement. Our Industry is recognised and valued across the world, yet undervalued by our own Government. It’s time to push back and show the power of electronic music and the night time economy through its greatest asset, its people! Time to #Letusdance.”
Eats Everything, leading U.K. artist says, “This Government is all about money, and it can’t be that our industry isn’t financially beneficial to them because we clearly are, so it has to be merely down to the fact that they don’t like the culture plain and simple. I’m absolutely not a Covid denier or anti mask/vaxer in any way shape or form, but what I am is a person who is a member of an industry that has been totally downtrodden time and time again…Stop ruining hearts, minds and livelihoods”.
Hannah Wants, British DJ and Producer, who is also performing on Sunday says, “I’m proud and excited that the dance music industry is coming together as one to ultimately fight for our industries future.”
The industry has lost all confidence in the Government over their handling of the arts through the last 18 months and there are huge signs that the Government has a complete disregard for the very industry which makes life so worth living for workers and music lovers combined. 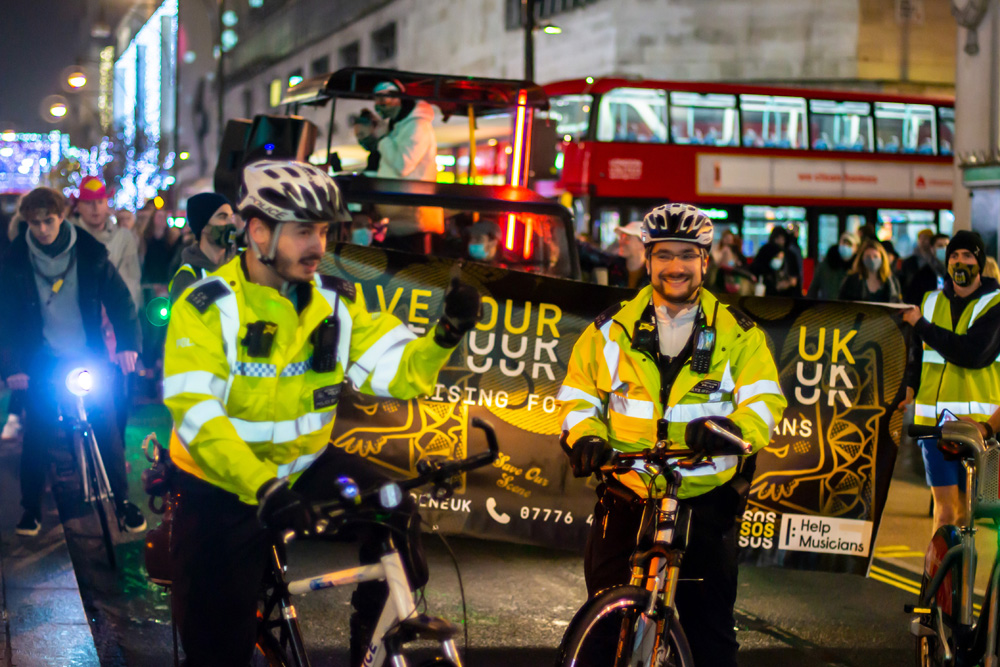 Fleming continues “We are protesting this week to tell the Government that enough is enough and we will not stay silent any longer. Too many jobs have been lost and the damage has become irreversible. Around 10,000 licensed venues have already closed permanently and over 400,000 live events staff have lost their jobs. Our message to the Government is if they delay any further, we will be on the streets protesting daily. We cannot afford to wait any longer.”
One of the organisers, Kai Cant says, “Some might ask, why protest now, it’s only 4 weeks away? To which I answer, if we stay silent, this will present a greater potential for the Government to delay again and again. We have run many polls over the past 2 days, which shows on average 90% of the population don’t believe they will lift all restrictions on July 19th. This shows a complete lack of confidence, so that is why we are here today. For the people.”
Save Our Scene supports people’s personal choice in whether they decide to engage with the vaccination programme or not and they respect people’s opinion on the matter.
They have also encouraged everyone to act responsibly, safely and pick up their litter on the march.
#FREEDOMTODANCE
#FREEDOMTODANCE Alan Fitzpatrick Eats Everything electric mode Fat Tony Franky Wah Hannah Wants Night Time Industries Association SAVE OUR SCENE UK
Share. Twitter Facebook Google+ Pinterest LinkedIn Tumblr Email
Previous ArticleARC Festival adds Channel Tres (DJ Set), DJ Holographic, Lee Foss, Layton Giordani, Toni Varga, and TSHA
Next Article Brand-New Toolroom Vaults Vol. 1 Album