Friday 13th September Kraftwerk’s spectacular live show will feature alongside DJ sets from COCOON founder Sven Väth and the mighty Seth Troxler, making for one mouthwatering line-up.
Something extraordinary is a little over 3 weeks away.

“There are moments in life where you pinch yourself. Where life is beyond your wildest dreams. This is one of those moments. Kraftwerk, Sven Vath, Cocoon 20th Anniversary says everything you need to know. It’s beyond an honour to share the stage on this legendary night with two of the world’s biggest musical influences, my heroes in the place I call home. Joyous and grateful to say the least”
SETH TROXLER 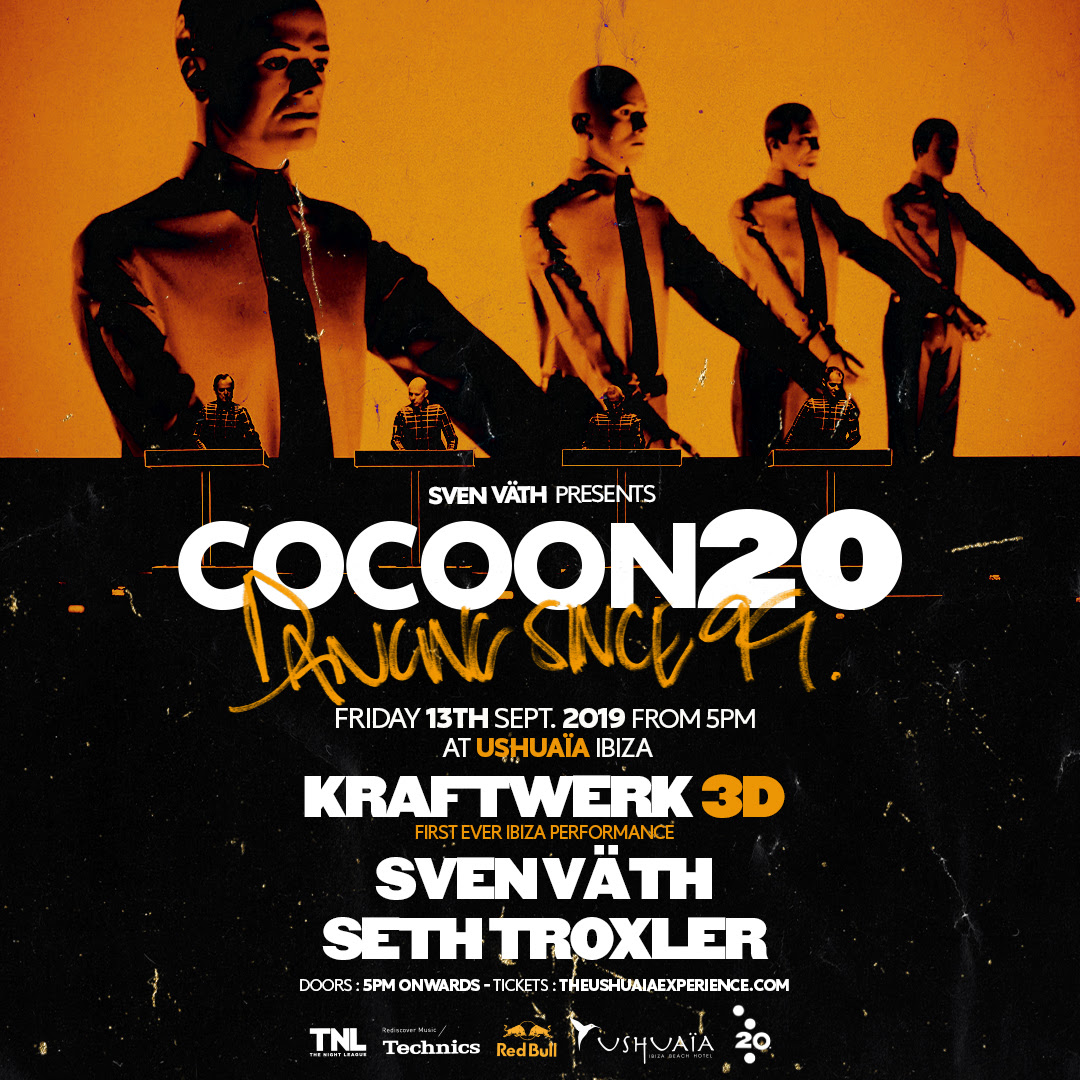 COCOON & Ushuaïa Ibiza are preparing for one of the most momentous events in its illustrious history as COCOON announce an unmissable prospect for their party at the open-air venue on Friday 13 September as Sven Väth is joined by the revolutionary Kraftwerk to continue the COCOON 20th anniversary celebrations. To complete the line up for this gigantic Ibiza occasion, Ushuaïa Ibiza and COCOON announce that the talismanic adventurer Seth Troxler will also perform.

In what is a huge coup for COCOON and Ushuaïa Ibiza, electronic music pioneers Kraftwerk will perform one of their immersive 3D shows, where their legendary, groundbreaking music is paired with spectacular visuals and 3D glasses for the audience. It will be the very first time they have played in Ibiza.

Kraftwerk’s influence cannot be overstated, with everyone from Daft Punk to David Bowie, Madonna and Coldplay having inspired by or having sampled their work, and tracks of theirs like ‘Trans-Europe Express’ providing some of the foundational building blocks for the birth of hip-hop.

Väth can be seen as one of the successors of Kraftwerk’s legacy in placing German electronic music on the map, helping do what they did for electro and synth music for techno. It’s a perfect fit, and makes for the kind of night Ibiza has never seen before.

As a 360 music and entertainment company, The Night League, the team behind Ushuaïa Ibiza, brings the most sought-after names to Ushuaïa Ibiza’s world-famous stage and ensures they remain one step ahead of the game every time.